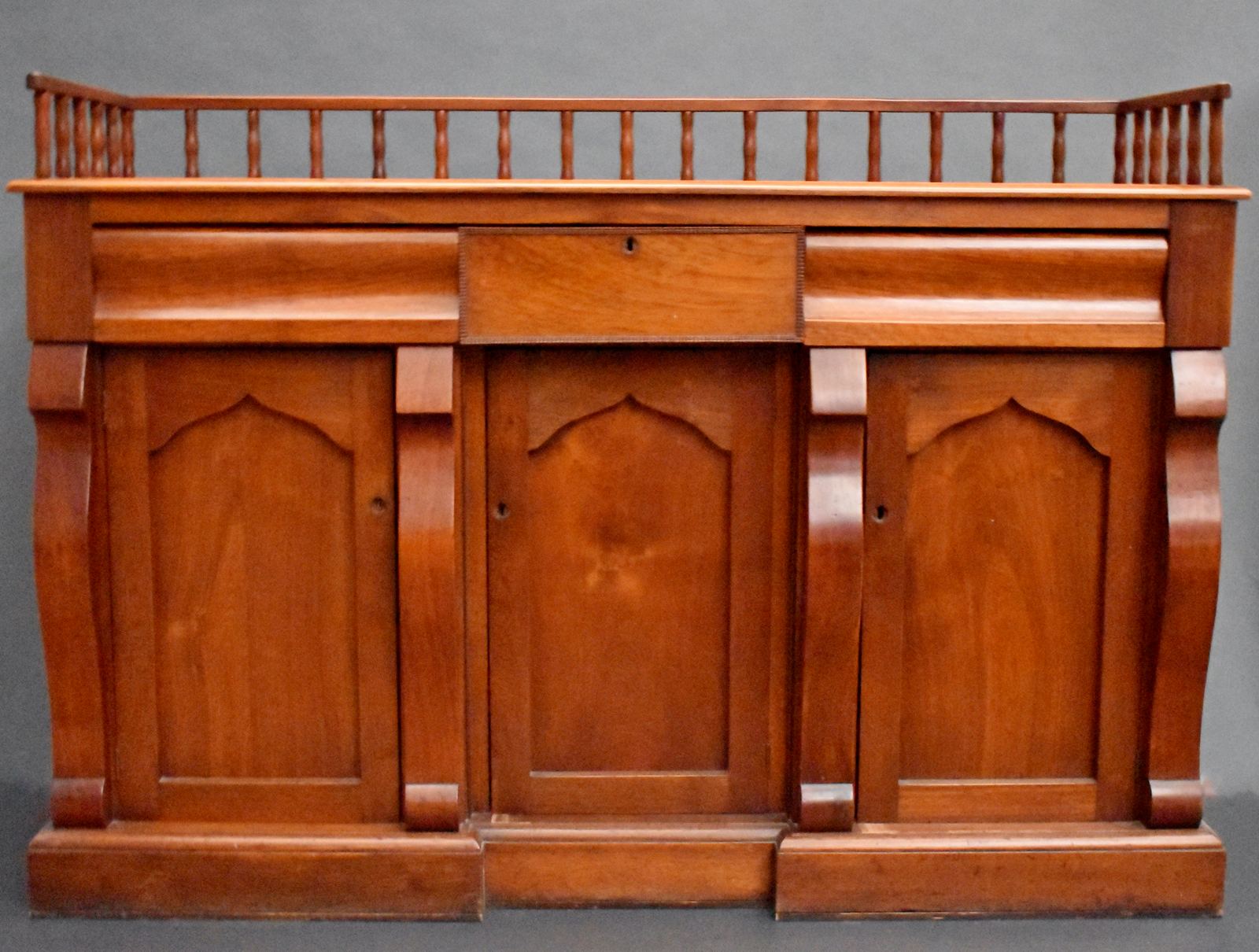 Reid’s factory and showroom was a large frame building that stood on the south side of Main Street (Old Brock Street) beside the present Catherwood restaurant. The storefront displayed various finished furniture with the coffins “discreetly” housed in the rear.

The workshop was technologically advanced through the use of horsepower to run the machines compared to those driven by foot powered treadles. This also meant that the hearse horse was kept in fine exercised condition when not required for funeral services.

Furniture manufactured by Reid varied in both size and style. Examples of sideboards, china and book cabinets as well as washstands have been documented. Characteristically, these known examples share similarities with the late-Empire style design (c.1815-1830). Cabinet doors typically feature arched inset panels with most pieces being made of walnut and pine as a secondary wood. Philip Shackleton, in his authoritative book Furniture of Old Ontario, describes the Reid sideboard featured in WHAM’s exhibit as an eclectic and unusual provincial piece. It has a row of bowed pilasters often associated with Baltimore architect-author John Hall, who was working in the mid-1800’s.

A specialty for the shop were staircases with many surviving in various Vittoria homes today. The stairs were designed, constructed and fully assembled in the shop before being installed in the homes. The handrails were carved from walnut and often featured an elegant winding stair tread.

For an idea of the overall scale of operation, references from business directories as well as the 1861 census highlight capital investments of Reid’s workshop as having $1,400, one employee earning $25 a month, and $200 worth of lumber.

As was often the case for early cabinet makers, operating an undertaking business provided additional income. As reported in the memoirs of life-long resident Miss J.C. Palmer in 1959, Reid’s coffins were of two types – walnut for the wealthy costing $10.00, and chestnut for the less prosperous at $5.00. Apprentices Robert Gunton and Allan Swayce, who would later take over the business after Reid’s death in 1881, were responsible for measuring the deceased for coffin fitting. It was also noted that the majority of coffins were not ready-made and required both Reid and his apprentice to work well into the night in order to finish for the morning funeral service.

The company continued under the direction of Gunton and Swayce until the late 1890’s.

Reid married Elspth Shand, daughter of William Shand Sr. of Woodhouse Township, and raised a family of five sons and three daughters. None of his sons followed their father’s trade. Of note, Archie and Frank studied law and establishing a prominent firm in Simcoe. George and William became general merchants, operating businesses in both Vittoria and Port Dover.

Featured is a rod-back Windsor side chair from a group of eight made by Archibald Reid for the choir loft in Christ Church Anglican, Vittoria.

Overall, the chair is simplified with its straight back, solid black colour and stenciled decoration.

Reid was responsible for most of the interior Church furnishings including the pulpit, railings and alter table – all of which have been featured in national publications on early religious architecture in Canada.

Information about admission, directions and hours